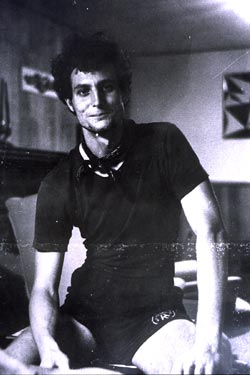 Virginia, Labor Day, 1975. Taken by a friend
Here are a couple of pictures from Dave's hike. His diary ended up being 3 5"x7" notebooks. The writing is very small.

I was a southbound hiker. The things that were notable going from Maine were:

1. The Katahdin trail was closed the first few days of June due to snow.

2. There had been severe storms in the winter/spring of '75 and the trail crews hadn't been out by the first of June. There was a tremendous number of blow downs and the first 100 miles were very slow going.

3. I hit CT in the first week of August and there was a terrific heat wave. Temps well above 90 made the numerous smaller mountains just as tiring as the larger ones to the north.

4. After Labor Day, on weekdays, the trails were almost completely deserted in NC/TN/GA. It was great.

5. As I remember it today, I was only aware of 3-4 southbound thru-hikers. There may have been others behind me, but Ry Southard and Wayne Biller are the only two I had contact with on a regular basis.

6. I don't think many hikers had trail names, but again my memory may be faulty.

7. The half-gallon ice cream picture was taken on August 24, 1975 in Duncannon. It was 69 cents! The first ice cream I had on the trail was a Dixie Cup (half cup?) in Moncton, Maine. By the time I got to Tennessee, I would eat a half gallon of ice cream and a pound package of cookies just to take the edge off before doing my grocery shopping.
Copyright © Appalachian Trail Museum, Inc.