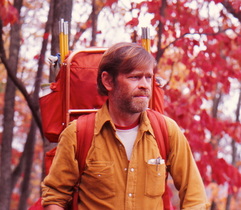 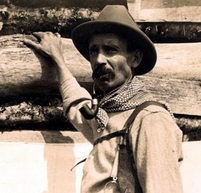 Horace Kephart moved to western North Carolina in 1904, where he spent the rest of his life.  He became a leader in the movement to preserve America's wild spaces through the formation of national parks.  Kephart and his friend photographer George Masa spent decades advocating for the preservation of the mountainous wilderness along the Tennessee-North Carolina border, which became the Great Smoky Mountains National Park.  Kephart signed on to Benton MacKaye's dream of an Appalachian Trail in the 1920s.  He played a major role in laying out the 70 mile route that the Appalachian Trail takes through the Smokies.  He was killed in an automobile accident in 1931, just as his proposed Appalachian Trail route was being built.  Just before his death, Mt. Kephart  in the Smokies was named in his honor. 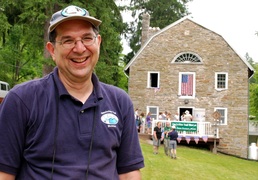 Larry Luxenberg's life has been inextricably tied to the Appalachian Trail since he read a news story about it in grade school.  This led to his 1980 A.T. thru-hike and his involvement with key trail groups like Appalachian Trail Conservancy, Appalachian Long Distance Hikers Association, the American Hiking Society and so many others.  His 1994 book Walking The Appalachian Trail definitively documents the A.T. experience.  But Larry's crowning achievement was the realization in 2010 of his decades long dream to open a Museum devoted to America's most famous long distance hiking trail.  As founder and President of the Appalachian Trail Museum, Larry has shown unswerving dedication to his goals, while quietly and unselfishly motivating others to aid the effort.  Larry was chosen by the other members of the A.T. Hall of Fame selection committee without his knowledge.  When told of his induction, Larry protested mildly that he has a long list of trail pioneers who deserve induction before him.  To those who know Larry well, this reaction is unsurprising, though inaccurate. 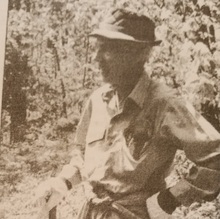 Arch Nichols spent a long life in devotion to the Appalachian Trail, particularly the portion in his beloved western North Carolina.  A longtime Forest Service official, he was given primary responsibility for developing a new route for the A.T. through North Carolina in the early 1940s.  He almost entirely responsible--after a long crusade--in securing Max Patch for the A.T. He also served longer than anyone else on the ATC board (1939-1948,1952-1979).  Beyond designing and building the trail himself, Mr. Nichols attracted others to the trail movement, including Rev. A. Rufus Morgan, who almost single-handedly maintained 50 miles of the trail for decades.  He was a leader in the Carolina Mountain Club for many years, and helped to develop the Tennessee Eastman Hiking and Canoeing Club.  Described as a "gentle giant" of the A.T., Mr. Nichols tirelessly advocated for the preservation of precious trail icons like Max Patch, Hump Mountain and the Highlands of Roan. He died in 1989 at age 81.
The 2016 Class was honored at the Sixth Appalachian Trail Hall of Fame Banquet, on  June 3, 2016.  HERE is a link to a video of the 2016 Banquet.  HERE is a link to a slideshow of pictures from the Banquet.
Copyright © Appalachian Trail Museum, Inc.